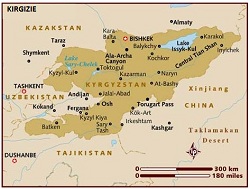 North of Kyrgyzstan lies enormous Kazakhstan and in the east, it borders on the even bigger China. The capital of the Kyrgyz Republic (official name) is Bishkek, where about 17% of the population live. The former Soviet satellite country has a beautiful nature, a multi-ethnical society and a lot of space. It is approximately 5 times as large as the Netherlands with about 5,8 million people.

About 75% of the population is officially Moslem, but very liberal, probably because of the fact that the Kyrgyz originally were nomads and very fond of their freedom.

About 95% of Kyrgyzstan is mountainous with altitudes up to 7000 meters. There are beautiful mountain lakes, such as lake Issyk-Kul on 1600 meters with a water surface of more than 6200 km2. The country has a continental climate with in summertime as highest temperature about 40°C and in wintertime as lowest about -25°C.

In 1936 Kyrgyzstan became a Soviet Republic. In 1991, after the Soviet Union collapsed, Kyrgyzstan declared itself independent and in 1993 a new constitution took effect, giving the head of state far-reaching powers. Unfortunately, this independence did not bring the desired economic progress. The country hardly has minerals and no oil and is dependent on agriculture, horticulture and cattle breeding. There is bad infrastructure.

Kyrgyzstan still has a tribe system with its own values. This system together with interethnic tensions, violence and corruption make the country unstable. The Uzbek people are the second population, mainly living in the southern part of the country. Many Kyrgyz people go to neighboring countries, especially Kazakhstan and Russia, where they think to earn more than in their own country.

Kyrgyz youth is oriented towards western countries and speaks a little English. Older people mostly speak Russian and have two passports, one from Kyrgyzstan and one from Russia.

The currency is a Kyrgyz Som (KGS). The exchange rate differs strongly. In March 2016 € 1 was about KGS 80. Changing money is possible 24/7. Credit cards are only accepted in Bishkek. With a stay in Kyrgyzstan of less than 60 days, a visa is not necessary.