The Elnura Foundation was founded on February 4, 2004 by Jan van Bremen. He became acquainted with Kyrgyzstan in the previous period when he worked as a professional soldier at Manas, the air base near Bishkek, where Dutch soldiers and aircrafts were stationed. The confrontation with the need and poverty in Bishkek has been the basis for the foundation of the Elnura Foundation. 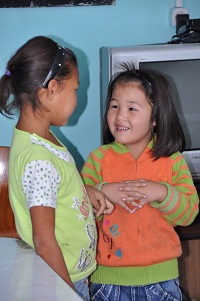 In 2010, Aleid van der Spek handed over her activities to help the children who live on the streets of Bishkek to the Elnura Foundation. In 2001, she had already seen these children's problems with her own eyes. This happened when she visited a Dutch volunteer at the NGO Center for the Protection of Children (CPC) in Bishkek. From that moment, she initiated different actions in order to raise money among family and friends for clearly described projects that would help these children. Through contacts with CPC, she got to know Jan van Bremen and his foundation at an early stage. By the end of 2009, when she had to decide to either stop or continue the work in an official setting, she soon decided to contact Jan van Bremen and the Elnura Foundation.

Now Elnura Foundation is a good basis to work from in order to improve the social circumstances of the children in difficult life situations.